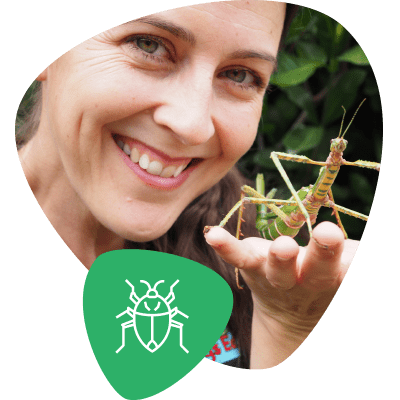 Hi, my name is Michelle Gleeson, formerly Larsen (a.k.a. the Bug Lady) and I am the director, co-founder and presenter for Bugs Ed. I was captivated by insects from an early age, and a brief frisking by my parents would usually turn up an array of critters in my pockets (some live, some dead, some very squashed). I was around eight when I decided to become an entomologist when I was older, and this passion continued all throughout school, eventually leading me to university.

Michelle Gleeson (a.k.a. The Bug Lady)
Director of Bugs Ed., author and presenter

I completed a Bachelor of Science majoring in Entomology at the University of Queensland and later went on to receive first class Honours in Entomology.

I’ve always wanted to share my love of insects with people, especially children – it reminds me of my own childhood fascination. In January 2003 this became a reality when, together with my good friends Anthony & Katie Hiller (Mount Glorious Biological Centre), we developed a range of hands-on insect workshops and thus founded Bugs Ed.

In addition to running Bugs Ed. I recently published my first book Miniature Lives – identifying insects in your home and garden, a comprehensive, easy-to-read identification guide to Australian insects. Published by CSIRO Publishing, it has received lots of praise, including a nomination for the prestigious Royal Zoological Society of NSW Whitley Awards.

In my career so far I have had the opportunity to work with some amazing people, but none more so than the amazing Sir David Attenborough. In December 2009, I got to work side by side with the wildlife guru during his trip down under to film his latest series. We spent the day at Australia Zoo, wrangling rhinoceros beetles alongside D.J., a 2 tonne African Rhinoceros. Best. Day. Ever.

As well as directing Bugs Ed, I am an Adjunct Industry Fellow at the University of Queensland. My work there has included outreach programs in remote schools in outback Queensland, development of practical lab sessions to introduce secondary school students to Biological Sciences at UQ and various field research projects.

My past work experience has included positions such as:

…as well as co-ordinating displays for:


I pop up regularly on TV shows such as Toasted TV, Totally Wild, Scope and Crocamole and discuss topics such as keeping insects as pets, making your own bug catchers, insect defence and even Entomophagy – the science of eating insects.